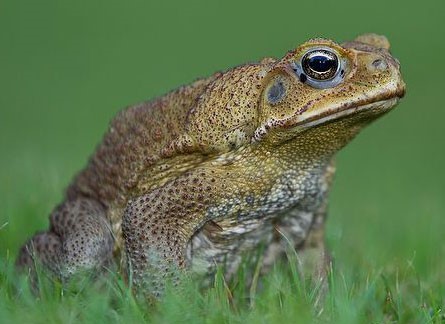 They have a varied palate, eating small rodents, reptiles, other amphibians, birds, and even bats and a range of invertebrates, they also eat plants, dog food, and household refuse! This toad can locate food by smell which is unusual as most frogs and toads rely on their vision and seeing their prey move.

Toadspawn is long strings of eggs that hatch into tadpoles and them metamorphose into toadlets! They are poisonous even as tadpoles. Strings of spawn have been found over 20 metres long!

Also called the marine toad, we have a pair of these toads on exhibit in the encounter zone building undercover by the stage. During the day they seek a moist and secure spot in there exhibit but can be seen with perserverance!

The adults are entirely terrestrial just coming to freshwater to breed. In their original habitat they are sub-tropical forest dwellers but as they have become invasive species they seem to prefer open grassland and woodland particularly near human dwellings in ditches and gardens. Their original birth home is the northern Amazon area in South America.

The worlds largest toad at 24cms with poison glands! This is the species that exudes Bufotoxin a strong hallucogenic. The toad allso excretes other toxins which are poisonous and can kill!

In their natural area of origin cane toads do not not occcur in large numbers and many different predator species feed on them that have developed immunity. In their introduced countries their partoid glands make them poisonous to any animal that eats the gland in them. South American Indians remove this gland and regularily eat cane toads. They can tolerate low humidity and a wide spread of temperature so they can easily adapt to many new environments when introduced. They seem to thrive between 15C and 40C and can withstand losing over 50% of their bodies moisture.