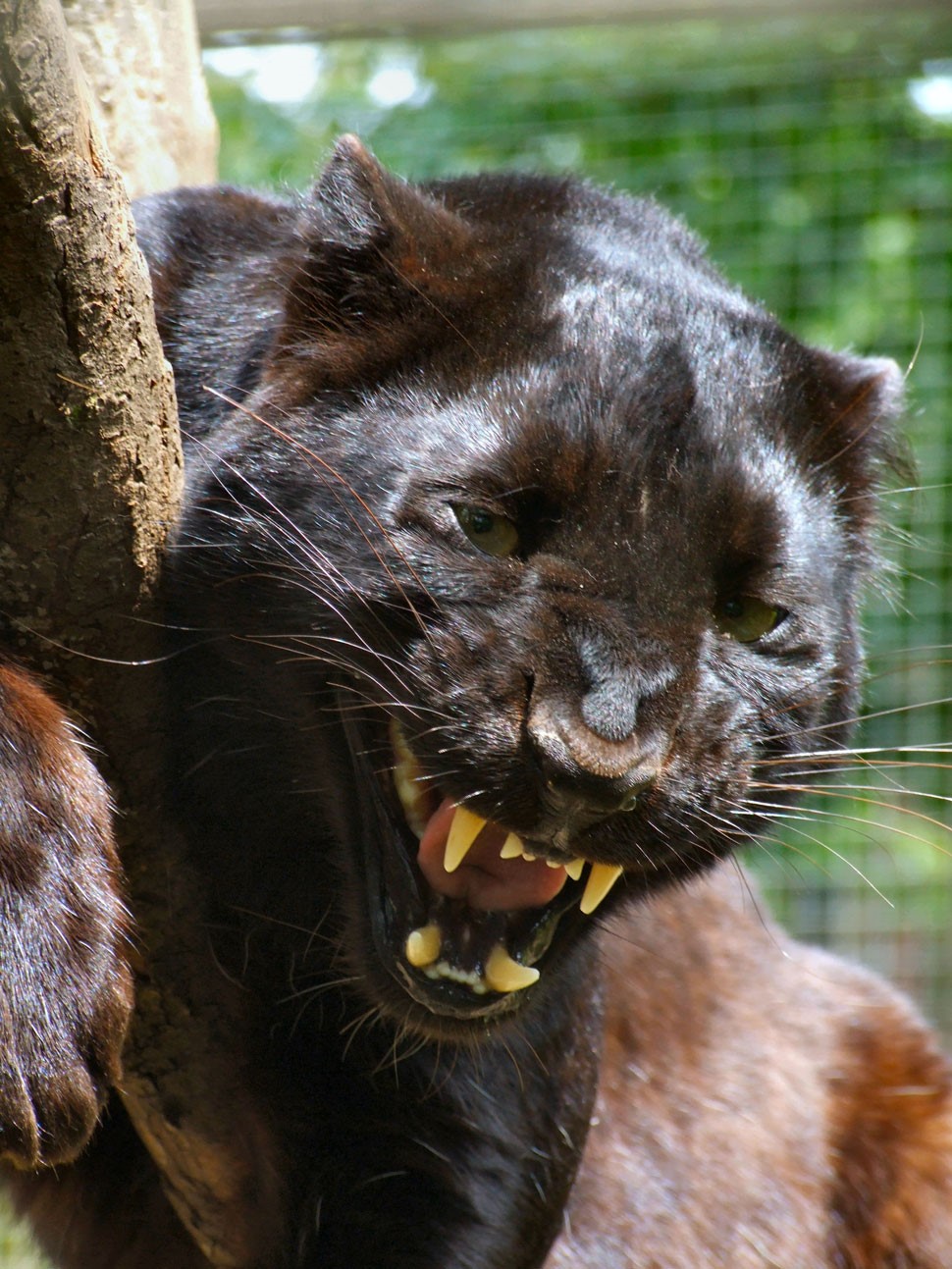 Depending on where they live leopards hunt and kill a variety of prey usually in the 10 -40 kg weight range. They are capable of killing by strangulation larger prey up to the size of juvenile giraffes weighing in at 120kgs+, but normally Impala, reed buck, baboons and young zebra or wildebeest in Africa, spotted deer, wild boar, monkeys such as langurs and macaques or even smaller rodents such as rats or porcupines if hungry! They are not averse to domestic dogs and pigs which often brings them into conflict with people.

The Exmoor Beast is understood to be a melanistic leopard. These are a genetic mutation that exists in the wild but it reduces their vigour and litter numbers are smaller compared to typical leopard pairings. A litter comprising of two cubs is typical when both parents have a black coat and this often decreases to one cub once the female leopard gets to middle age ( 10 years or so). The oestrus cycle occurs every 45-46 days until the female leopard gets pregnant and lasts for a period of about 6 days. Gestation about 95 to 100 days. The cubs are "denned" maybe in a cave for the first 3 months and then are able to follow their mother from hide to kill until about a year old when they then accompany her and learn to hunt. Depending on the sex of her cubs and attitude of the territorial male, cubs can become independent from 18 months of age and are encouraged out of the vicinity!

Is there an “Exmoor Beast”? Is it a black leopard or maybe even a puma or could even both be walking around us in the few wild places we have left in-between out homes and work places? Most people who believe they have seen the “mythical beast” would say that it was a black leopard just like our two cats here at Exmoor Zoo! The most recent sighting in the Quantock hills in Somerset: http://www.dailymail.co.uk/news/article-4415922/Panther-like-beast-spotted-Crowcombe-Park-Gate.html A recent BBC radio 4 podcast about the "Exmoor Beast": http://www.bbc.co.uk/programmes/b09dxz1j Pod cast conversations about the UK "beasts": https://bigcatconversations.com/ Ebony is our black lady leopard, who is, amazingly, just one of three left in captivity in Great Britain. She is the only possible breeding female throughout the British Isles! Born in the Santago Rare Cat Trust in Hertfordshire, her dad is American and mum a Czech! She has settled down into a daily routine and now regularly awaits her afternoon feed, timed with a talk on the "Exmoor Beast" at 4.00pm (not Saturdays).

Leopards stalk prey! Cover is essential and used to great advantage! A lack of cover in the environment often means that the leopard becomes more nocturnal using darkness to find prey. Very adaptable they can live in virtually any environment including the suburbs of large cities such as Mumbai! Black leopards tend to come from the rain forest areas of central Asia.

The term Big Cat correctly applied refers to the genus Panthera, the lion, tiger, leopard, jaguar and snow leopard, and only these five. The puma and lynx are in the genus Felix, the Small Cats, even though the puma is about leopard size. Rick Minter will answer queries regarding the mystery cats at large in Britain and would be pleased to receive sightings whether old or recent. Confidentiality is guaranteed if desired. [email protected]

Zoysa and Ebony our pair of melanistic black leopards are not typical leopards! Zoysa has been hand reared and loves to interact and play with visitors inside his enclosure and Ebony although reared by her parents has become used to interreacting with people due to Zoysa' s behaviour. In the wild leopards would normally shun any contact with people and are very shy and secretive. If occurring near people they would only be active nocturnally but in protected National Parks they are often witnessed hunting during the day as opportunity presents itself! Male leopards are territorial and their territory may encompass the territories of three or more females which they fight other males to hold. Scent marking and urine sprays, claw scratches on territory tree boundaries and faecal deposits tell others of their boundaries!