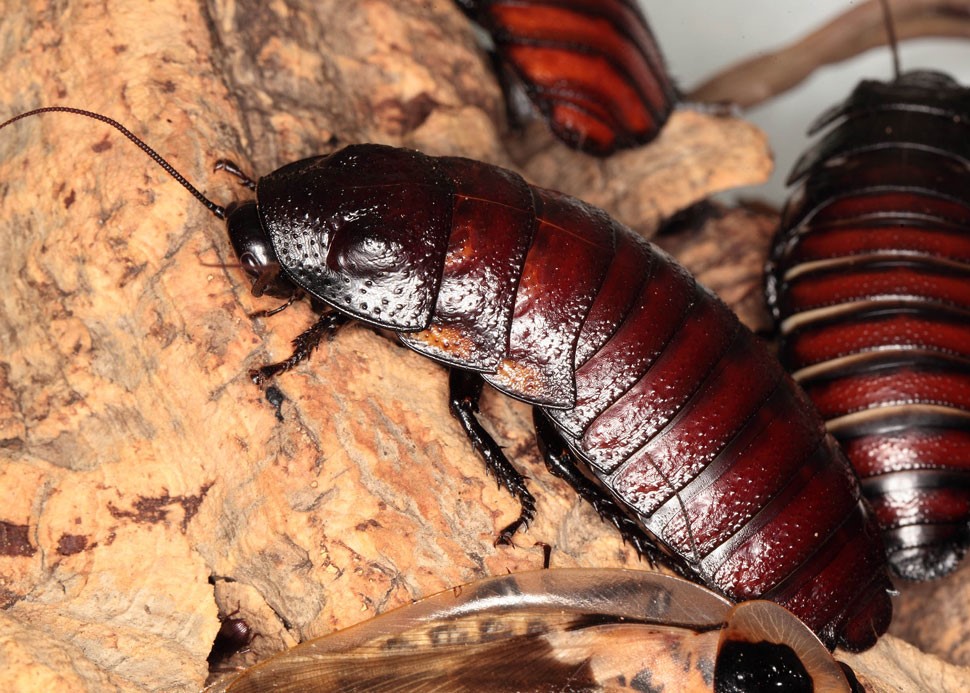 Effectively any vegetable matter (although they specialise in rotting wood). However, if it was alive at some point be it animal or plant then cockroaches are capable of digesting the meal!

Cockroaches have two sexes and it is the female that carries the eggs within her in a "ootheca" where the eggs develop into tiny cockroaches andthe nymphs are then "birthed" into the environment (often under the bark layers of fallen trees). The young of cockroaches will stay with their parents for some considerable time as they grow.

We use these animals for our encounter sessions and outreach. A small colony of both adults and young are maintained off exhibit and are a reltively clean typical example of an insect that visitors can come into close contact with.

Living on the island of Madagscar this is one of a few cockroaches that have no wings. Scientists beleive they evolved their loss as they had no use for them on the island. They are reknown for being found in rotting logs and are a major part of the decomposition cycle in the Madagascan forests!

One of the largest species of cockroach attaining 10cms in length! Scientists reckon due to their shiny wax-like exoskeleton and their propensity to hide that this would be one of the few animals that could survive a nuclear holocaust relatively unchanged by radiation! This cockroach often hisses on being picked up or disturbed. They express air out of their body through the spiracles in the exoskeleton and often sound like snakes!

Adults and their young live together often inside rotting structures and may not venture beyond this so long as the food source remains. They require warmth and unlike many temperate species of cockroach are unlikely to invade new areas outside of the tropics if they become accidentally introduced.