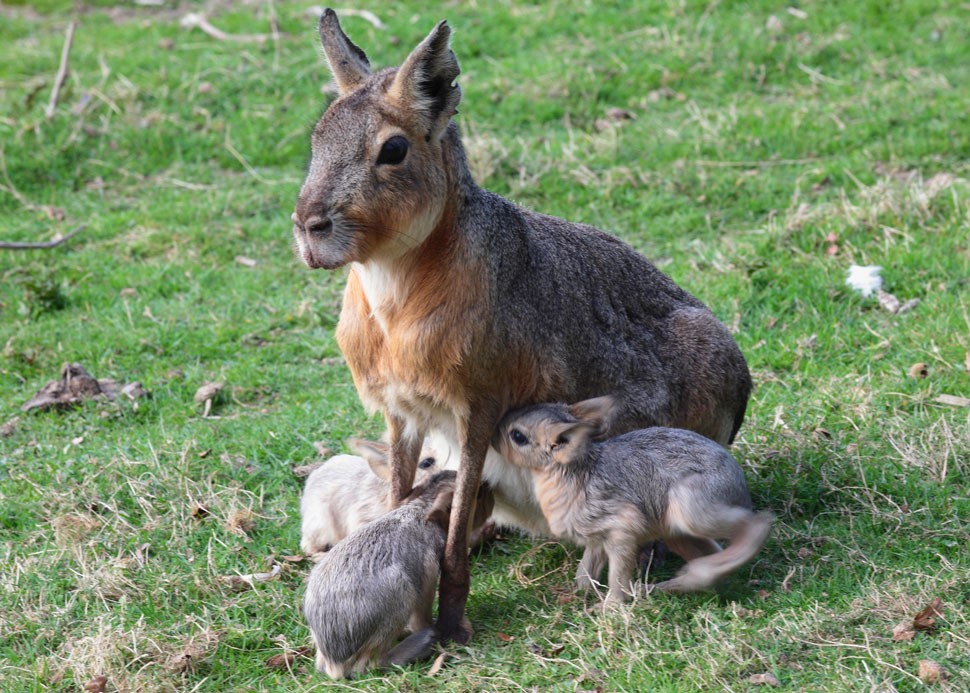 A strict herbivore mainly eating grasses and cacti. The cacti are likely a main source of water through the year as rainfall can be unpredictable and cacti are around 75% water. This high fibre and cellulose diet is broken down by fermentation in a pouch called a cecum attached to the large intestine.

Mara are monogamous meaning they form a bond for life. Female mara are ready to mate every 3-4 months but only for half an hour! As the pair spend all their time together the male does not miss this chance. In the wild only one litter is produced a year consisting of 1-2 pups. In captivity however they can give birth 2 or 3 times a year.

We hold a breeding group of Mara and their pups can often be seen emerging from the crèche dens in their grass enclosure (number 30 on the zoo trail) in the warmer summer months.

Mara are coprophagous which means they eat their own poo! This is so that the second time they digest it they can make sure they have absorbed all the goodness from the plants they have eaten. A curious mammal one that appears to be a cross between several animals such as a hare and a deer!

Unlike many rodents mara are active during the day and will even bask in the sun. When a predator approaches they will escape by galloping or stotting. Stotting is a high-speed form of locomotion involving rapid bounces using all four limbs at once.