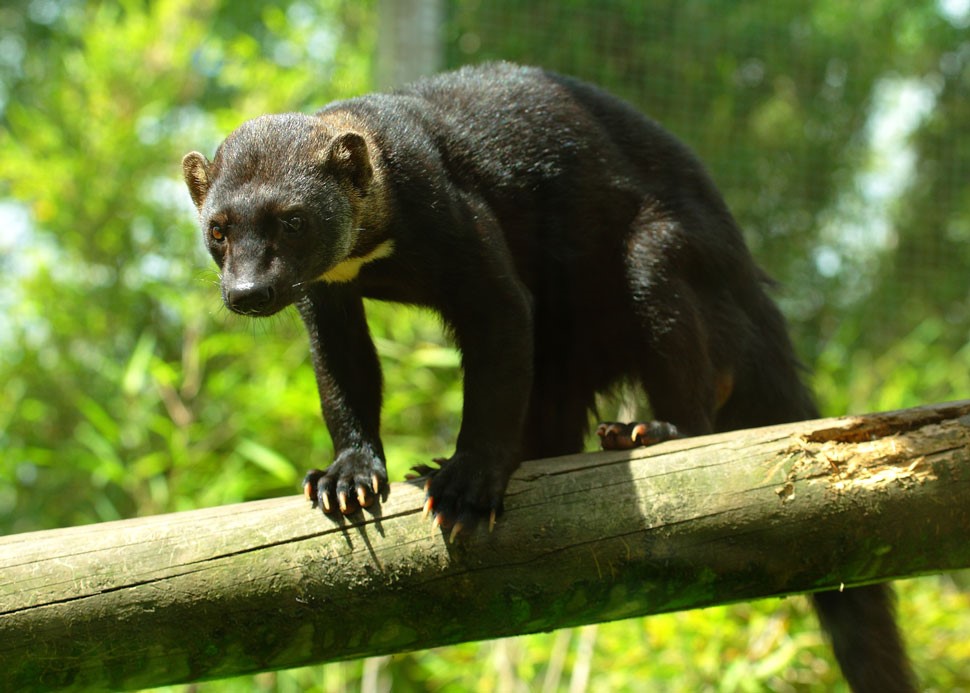 The tayra is omnivorous. It shows a preference for small mammals, the spiny rat in particular, but it will eat whatever is available. Mammals are the most abundant part of the tayra's diet but it also eats significant amounts of fruit, invertebrates and reptiles, in that order. It has also been shown that the tayra occasionally eats honeycomb when it is available!

tayra breed at most once a year! Gestation lasts for about 63-70 days with a litter size of 2-3 babies per season, each weighing about 74-92 grams. Newborns open their eyes at about 35-58 days and they nurse for 2-3 months. It would seem the estrous cycle can be seasonal, with births occuring in March and July. Others believe that the tayra is polyestrous and a non-seasonal breeder, experiencing an estrous cycle of around 17 days with a 2-3 day receptivity about three times a year. We have never successfully bred our pair so we cannot comment!

Our Tayra are nearly 10 years old now (summer 2018) and we would dearly love to breed these two animals! Our male was hand reared and we suspect despite the two getting on really well this may be a problem? Like any weasel they are really active, although middle age has slowed them down as they do a lot more resting in their enclosure than in the past (especially on hot summer days)!

Terrestial, arboreal and diurnal! This is both a predator and opportunist feeder of the Amazon rainforest that is usally encountered in the boughs and limbs of the canopy trees as it so agile.

A very big weasel about the size of an average domestic dog but weasel like in shape with males weighing as much as 7kgs! Individual tayra's have a unique patterned throat patch that enables them to be distinguished apart from ech other. They can be easily tamed and indigenous people often use them to control vermin around their dwellings.

This is a solitary animal in the wild. They can be seen as pairs particulary prior and during breeding and occaisionally as a family group but their natural lifestyle is one of solitary hunting and living.